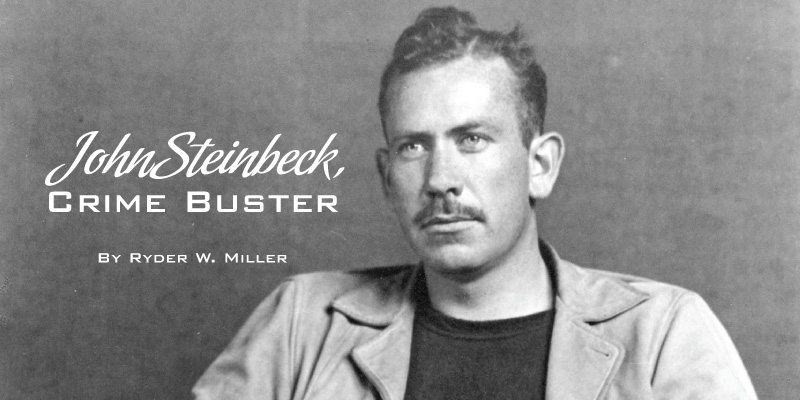 Murder at Full Moon, a novel John Steinbeck (1902-1968) wrote in college at Stanford University, but was never published, can only be found at The Harry Ransom Center in Austin, Texas. Steinbeck wrote Murder at Full Moon (1931) to earn some “fast” money during the age of the pulps, but one can make an appointment to read it at the research center. It has not been forgotten and is referred to in novel introductions (To a God Unknown [1933]) and biographies, but not always in a fully descriptive way. A perusal of the novel does point out some interesting things about its author. The same can probably be said about the unpublished movie treatment for the movie Lifeboat (1944) from which Steinbeck wanted his name removed, but went on to get an Oscar nomination for. There do remain things written by Steinbeck that can be found in research centers, including some pieces he wrote about his days in France, including 17 “attempts” at writing a piece called “One American in Paris,”  which is described in The Harry Ransom Center archive as: “17 various typescript articles, some with multiple copies.”

His unpublished pieces give some interesting insights into the author that will not be gained by reading his canonical book—in Steinbeck’s case, his half dozen or so canonical books. It is an interesting question about what would happen to Steinbeck’s reputation if some of these books were made available to the general reader. Would people be reading the wrong books by him? Lifeboat and Murder at Full Moon would make fascinating reading for Steinbeck fans and critics—especially for those who would like to see everything he has written. Some of his works and been forgotten or are not easily found, because they have become obscure.

Steinbeck is a huge subject with novels, stories collected, and uncollected, journalism (found and lost), autobiography (at least for two of his novels), memoir, travel writing, army propaganda, biography, letters… His life was also multifaceted, with a long period where he was not widely known, small successes, then fame, then big fame, awards, success, three wives, two children, transcontinental Americanism, travels abroad, and some interesting friends and colleagues. It is hard, maybe impossible for some, to have read everything with some of it not available or possibly still find. But there is likely to be some interest in more with there having been many different John Steinbecks, in the sense that one could argue that he had periods, wrote different kinds of books, wrote in different mediums, but never wrote the same book twice. These unpublished pieces show him working at his craft.

One could say that Murder at Full Moon belonged with his earlier work, back when he was still appreciated, or at least was published, despite a wry or ironic—or even humorous—sense. He also wrote serious novels that he was more well known for, and received critical acclaim for, but one should not forget that Steinbeck was also a entertainer. He did not shy away from hard truths, but sometimes he also had a penchant for whimsy and dark humor. One can place Murder at Full Moon into his early novels, when he was still interested in myth, theology, humor, and genre literature, preceding the serious books he wrote during the depression and about farm workers.

Then he was on to the war. He moved beyond regionalism, travelled, and philosophized, but wanted to return to old subjects, places, and stories. His death was followed by posthumous works, like his journals from East of Eden and The Grapes of Wrath, his letters, articles about Vietnam, Viva Zapata, and his King Arthur book.

Of importance, concerning Murder at Full Moon, which he is purported to have written in nine days, is its similarities with Tortilla Flat (1935). One should note that Steinbeck is loved also for his Americana, especially some of the fun stories like Cannery Row (1945) that is set in Monterey. The wry Pastures of Heaven (1932) was also from this earlier period. These were not all serious regional novels; instead, some could provoke a laugh or two, even if they had a dark sensibility. Tortilla Flats was of that kind, being about some bindlestiffs who wonder how they are going to keep a roof over their head. They do have their adventures with the nearby town folk. It is not hard to appreciate these amiable folks who have found some luck.

Some of the chapter descriptions in the table of contents are similar to Tortilla Flat and show Steinbeck evoking humor and also writing for fun:

“In which I become three lions and , in due course, undertake the classic metamorphosis—from butterfly to ant.”

“In which the reader is cordially invited to experience a lull before a storm, and in which, as a kind of entr’acte entertainment the meeting of a sick man and his injured dog is touchingly described.”

“In which everything happens at once, and the reader is permitted to contemplate a corpse that __is a corpse.”

Murder at Full Moon shares an ironic and wry tone. It also has characters with funny names, like Mr. Hoogle, Mack, and Herr Doctor Schmelling. One finds Steinbeck reveling in the irony of his times, showing how the human spirit triumphs and can make the best of things, even if they are bleak. In contrast, Steinbeck could also produce things that are hard and serious. He also wrote about war and inequity. Understanding his sense of humor, especially placed in history and genre, is a complicated and maybe unrewarding endeavor.

Murder at Full Moon, though, is also profound with Steinbeck seeming to believe that there really are cosmic forces that work on people. He seems to believe, here and elsewhere, that the moon can really have an effect on people. We are warned about the full moon, and there are stories about Werewolves that come out on such nights, but we don’t take this as seriously, as maybe he and some others did back then.

A character asks in the unpublished novel:

“How do you know? Hoogle retorted. “So far, the moon is the only thing we’re sure of.”

I am not sure if I should suggest that Steinbeck believed in the supernatural, but he had friends and characters who probably did. He was, however, fascinated by the cosmic, with there being numerous quotes that display such in his prose. Steinbeck’s The Forgotten Village (1941) argues for the need for modern medical science in some of the remote areas of Mexico, but he also had curses in some of his tales and myth—and maybe destiny. However, he was from a different time and wrote about a different time. He will have died fifty years ago sometime late next year.

Maybe the biggest problem with Murder at Full Moon is that it makes fun of itself and the genre it is set in. Satire for satire’s sake may not seem very worthwhile, but he also seems to be commenting about the social malaise that led to crime in his time and later fueled and generated some of the Film Noir that was to follow. It is hard to imagine a time where the police are too busy to solve all the crimes that are taking place. Law enforcement from the perspective of entertainment trends seems to need the help of the public to get some of the bad guys out there. Some folks have even hired professionals to get this job done. We also should mention that we need security devices in our homes and places of work, as well as security guards in some companies.

Some things surely seem to not be working out. They probably were not working in the time when Steinbeck wrote this novel as Peter Pym. Some might not find the satirical tone welcome, and maybe arrogant, but maybe for the times it was appropriate and would help solve crime problems. There have been a lot of wise and funny guys solving crimes since. This was before Chandler and Dashiell Hammett’s The Thin Man and reminds one a bit of Agatha Christie in its plotting, but those involved are not all restricted to a train or boat.

He did maintain an interest in this genre during his career. On a trip to Russia, he complained that someone absconded with the copy of Ellery Queen. He also complained in a letter that people were reading Mickey Spillane instead of some writers like himself. Also, he wrote a story called The Murder that won a O. Henry Award. This book in the archive is more like a mystery than a detective novel, but a bit of both.

Steinbeck was better and more famous for commenting about, and trying to solve, the bigger societal crimes, like, if people would be treated fairly at work or if they would have a roof over their heads.

He believed that things could be better, writing about Paris: